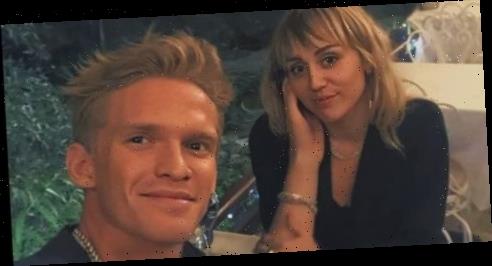 Remember when Cody Simpson was spotted out and about in NYC with Playboy model Jordy Murray, and everyone assumed he and Miley Cyrus had broken up? And then Cody’s sister was like, um that’s his best friend’s girlfriend? Yeah, well there’s been a new development. Apparently, a source told E! News they saw Cody “dancing behind the DJ booth at Little Sister with a group of girls,” at which point one of them “kissed him on the lips.”

How-ev-er! Cody’s agent shut any cheating speculation down in a statement to E!, saying “there is absolutely no truth to this story. Cody went out with a friend and all the rest is fabricated. Period.”

The source also claimed that Cody “was texting Miley, but his friend kept trying to grab the phone for him to stop,” and that eventually he and his friend went to another bar and the group of women followed them.

Okay! Meanwhile, Miley hasn’t commented on any of this drama and appears to be all about self-care these days, writing on Instagram, “I think it’s super important for everyone to truly enjoy themselves this holiday season. Take time off, relax, enjoy warm meals, indulge in the sweet treats we usually try to stay away from but alsooooo KEEP MOVING… Movement is an important ingredient to self love/care.”