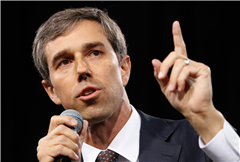 CNN claimed in an April tweet that it doesn't air its presidential candidate town halls for ratings, and instead produces them because "it's the right thing to do."

On Tuesday night, CNN hosted its latest town hall, this time with 2020 Democratic political hopeful Beto O'Rouke, and the early ratings are the some of the lowest the ratings-challenged cable news network's town halls have seen.

O’Rourke's ratings were way below Kamala Harris' CNN January 28 town hall — which brought in almost 2 million viewers to the network – and worse even than their March 27 town hall with Corey Booker, which drew in under a million viewers.

The special event, anchored by Chris Wallace in Claremont, New Hampshire, drew in 1.1 million average viewers according to Nielsen data, to top MSNBC and CNN combined.

Please note that the early cable news channel ratings format differs from the standard ratings you will receive this afternoon.