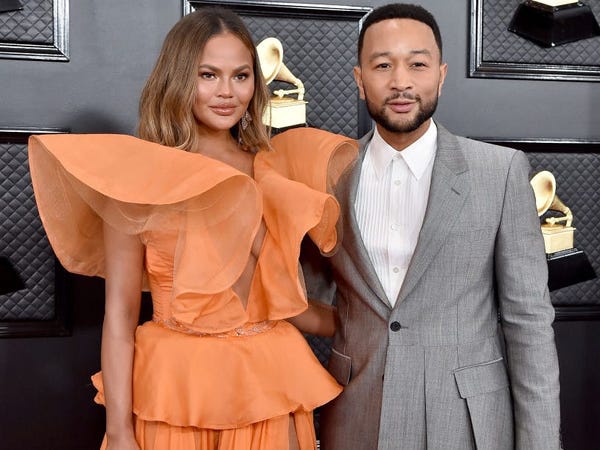 On Sunday, Chrissy Teigen shared a picture of a wrist tattoo that shows the name of her late son, Jack, in script.

The cursive design seems to match tattoos she and her husband John Legend both have on their arms, which include the names of their youngest kids, Miles and Luna.

In response to Teigen's picture, a fan wrote that they have been pondering a tattoo design to honor their stillborn child. Teigen offered her own idea, responding: "Let's help you find something you love. Maybe one s shape, a swirl of air around you."

Teigen's post comes less than a week after she opened up about losing her pregnancy in a Medium blog post, which was published on October 27.

On September 30, Teigen and Legend both posted a series of pictures on Instagram and Twitter that showed Teigen grieving in a hospital bed. Teigen wrote that she had lost her pregnancy.

"To our Jack – I'm so sorry that the first few moments of your life were met with so many complications, that we couldn't give you the home you needed to survive.  We will always love you," Teigen wrote.

She also wrote about the name that she and Legend chose for their son, which is now tattooed on her wrist.

"We never decide on our babies' names until the last possible moment after they're born, just before we leave the hospital," Teigen wrote in her Instagram post. "But we, for some reason, had started to call this little guy in my belly Jack.  So he will always be Jack to us.  Jack worked so hard to be a part of our little family, and he will be, forever."

Teigen's openness was met with an outpouring of support, especially from people who had gone through similar events, and it inspired people to share their own experiences of pregnancy loss.

"Chrissy's openness helps to shed this stigma and advance conversations about the topic, and help people realize that in the vast majority of cases there is nothing that anybody did or didn't do that could prevent this devastating event," Dr. Lilli Dash Zimmerman, a fertility specialist at Columbia University's Fertility Center who wasn't involved in Teigen's care, previously told Insider's Anna Medaris Miller.

Teigen was also a target of online harassment by conspiracy theorists and critics who disagreed with the intimate pictures.

In her recent blog post, Teigen opened up about why she decided to share photos of her grieving in the hospital, saying: "I lived it, I chose to do it, and more than anything, these photos aren't for anyone but the people who have lived this or are curious enough to wonder what something like this is like."

"I had asked my mom and John to take pictures, no matter how uncomfortable it was," Teigen wrote. "I explained to a very hesitant John that I needed them, and that I did NOT want to have to ever ask. That he just had to do it. He hated it. I could tell. It didn't make sense to him at the time."

In her blog post, Teigen added: "These photos are only for the people who need them. The thoughts of others do not matter to me."