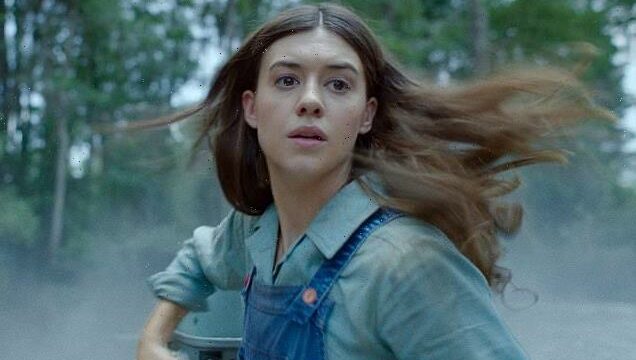 A feral girl? Daisy looks like she’s off to Waitrose: BRIAN VINER reviews Where The Crawdads Sing

Great and good novels, as we all know, face a perilous journey from printed page to silver screen. The new Netflix version of Persuasion offers a salutary lesson in how not to adapt a book, and here comes another. Where The Crawdads Sing turns a stirring and suspenseful story into cinematic mush.

There were conspicuous echoes of Harper Lee’s To Kill A Mockingbird, never a bad thing, in the 2018 bestseller by Delia Owens. But Olivia Newman’s picture systematically squanders all the virtues of the source material.

It really could be shown in film studies courses as an example of the pitfalls that directors and screenwriters should sidestep. This movie plunges waist-deep into just about all of them.

The English actress Daisy Edgar-Jones, who became so convincingly Irish in the TV hit Normal People, here adopts a whole new accent as Kya, who in the 1950s is abandoned by both parents and grows up fending for herself in the marshlands of coastal North Carolina. By the time she has reached her teens, in the 1960s, the local townsfolk have shunned her, regarding her as savage and contemptuously nicknaming her ‘marsh girl’.

Nevertheless, Kya meets and falls for the preternaturally kind and respectful Tate (Taylor John Smith), who gently teaches her to read and write. Together, they are a sugary young dream, less Tate and Kya than Tate & Lyle.

Moreover, Tate shares Kya’s love of nature, which she has somehow parlayed into a professorial-level knowledge of the birds and shellfish (a variety of which are colloquially known as crawdads) that exist in the marsh. 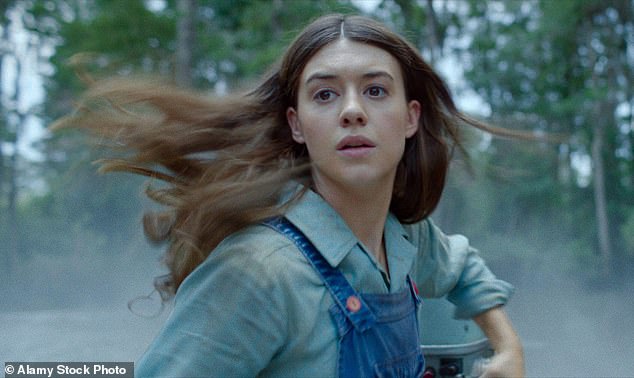 The English actress Daisy Edgar-Jones, who became so convincingly Irish in the TV hit Normal People, here adopts a whole new accent as Kya, who in the 1950s is abandoned by both parents and grows up fending for herself in the marshlands of coastal North Carolina

Handily, she can also draw like Leonardo da Vinci. Trademark look of adoration etched on his handsome features, Tate tells her that she really should send her wildlife sketches to a publisher. And darn it if they don’t turn out to be just what the world of publishing was waiting for.

In the meantime, however, Tate heads off to college, where his gigantic heart evidently no longer has room for Kya. So she takes up with the town’s football hero, Chase (another Brit, Harris Dickinson), and while she might understand the inner workings of your average crustacean, she does not see that he is rotten to the core.

Throughout all this we are whisked back and forth in time, between Kya’s burgeoning career, her romantic adventures, and a later murder trial, in which she is the defendant. I think that gives you the narrative without too many spoilers. In any case, the big spoilers all come courtesy of Newman and screenwriter Lucy Alibar, who don’t so much sanitise the story as scrub the life out of it. 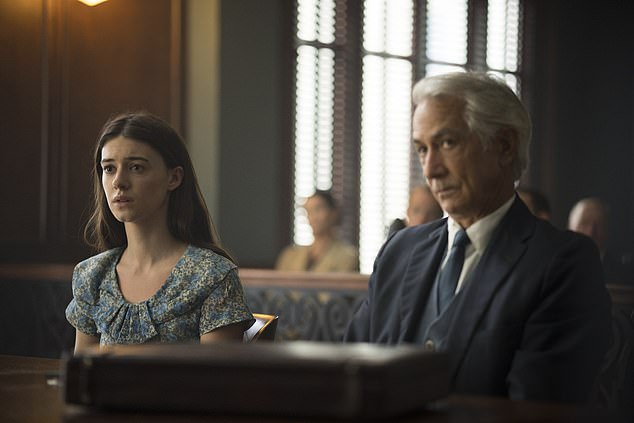 Throughout all this we are whisked back and forth in time, between Kya’s burgeoning career, her romantic adventures, and a later murder trial, in which she is the defendant. I think that gives you the narrative without too many spoilers 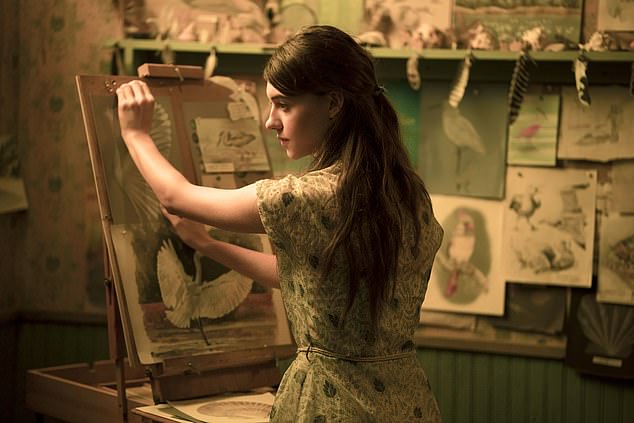 I’m loath to say so, because she’s an engaging young actress, but a good deal of the problem lies with Edgar-Jones. Worse than miscast, she is misdirected. This supposedly feral child looks like she’s learnt self-sufficiency by being allowed, occasionally, to go to Waitrose on her own

I’m loath to say so, because she’s an engaging young actress, but a good deal of the problem lies with Edgar-Jones. Worse than miscast, she is misdirected. This supposedly feral child looks like she’s learnt self-sufficiency by being allowed, occasionally, to go to Waitrose on her own.

Every time the story demands an unequivocal punch, it delivers a lacklustre slap. Tate and Chase are no more than caricatures of good and bad, while Kya’s doughty lawyer in the murder trial, played by David Straithairn, might as well be a hologram of Mockingbird’s Atticus Finch.

Not one of Hitchcock’s finest, perhaps, but this romantic thriller is still unsurpassably lovely on the eye, with the film’s trio of stars, Grace Kelly, Cary Grant and the French Riviera, all at their classy, elegant best.

On the upside, there’s some tip-top cinematography; the North Carolina wetlands never looked lovelier. But even that compounds the vague feeling, when you stagger out after two of the longer hours you’ll endure at the cinema this year, that you’d have derived as much pleasure from an extended shampoo commercial.

She will also makes the absolute most of its remote location, in this case the Highlands of Scotland. It’s a psychological horror story, decidedly light on scares, but powerfully anchored by a marvellous lead performance from Alice Krige.

As a callow school-leaver, I fell slightly in love with Krige when, in her screen-acting debut, she played Harold Abrahams’ beautiful actress girlfriend in Chariots Of Fire (1981). She’s a heck of a lot less lovable here, as imperious former movie star Veronica Ghent who, recovering from a double-mastectomy and struggling with her mental health, travels to a Scottish retreat with only her put-upon carer Desi (Kota Eberhardt, also excellent) for barely-tolerated company.

On arrival, she is appalled to find that the place is full of self-help groupies, led by a flamboyantly louche guru (a scene-stealer of a cameo for Rupert Everett). He wants his acolytes to connect with the Earth (‘don’t draw the landscape, let the landscape draw you’), but Veronica ends up connecting with it much more viscerally, summoning the spirits of the young women who were burned as witches there three centuries earlier.

This new-found strength enables her to right some wrongs on behalf of womankind, not least with a film director (Malcolm McDowell) against whom she has a well-deserved grievance.

If you discern a whiff of #MeToo about all this, you’re not wrong. Films taking a sharp kick at the so-called patriarchy have practically become a genre in their own right. But Charlotte Colbert’s debut feature is stylishly put together, and Krige is superb.

The day Our Lady of Paris went up in smoke

Just as many of us remember where we were when we first heard about the 9/11 atrocities, or the death of Diana, I can place myself exactly when I learnt in April 2019 that the mighty Gothic cathedral of Notre-Dame was ablaze.

Having lived in Paris for a year, and visited Notre-Dame many times then and since, I was profoundly shocked to think that it might end up as smouldering rubble.

It didn’t, mercifully. But Jean-Jacques Annaud’s dramatised account of those traumatic 24 hours, Notre-Dame On Fire (★★★✩✩, 12A, 110 mins) attempts to capture the mounting horror as fire crews courageously fought to get the inferno under control and rescue the priceless artworks and religious icons inside. His film doesn’t wholly succeed; some of the acting, and dialogue, are decidedly clunky. But the veteran French director, best known for English-language films such as The Name Of The Rose (1986) and Seven Years In Tibet (1997), very deftly weaves actual footage of the fire into his drama, astutely using split-screen techniques to create a documentary feel.

He is also unsparing in his depiction of how woeful safety measures were and how shambolically the French authorities initially responded. Almost unbelievably, the city’s fire chief wasn’t alerted until about half an hour after the fire began — by a colleague on holiday, who had seen mobile-phone footage.

I wish I could recommend this film, not least because Hookings is himself the son of a boxing champion, David ‘Bomber’ Pearce, who, like Belcher, died young. It was clearly a labour of love.

But, sadly, it’s a terribly ham-fisted affair; a ragbag of cliches and iffy dialogue, despite some proper star wattage in the form of Russell Crowe (as Jem’s tough old grandad) and Ray Winstone, in his almost obligatory turn as a gruff boxing trainer, only this time in a tricorn hat.

Notre-Dame On Fire is in cinemas. Prizefighter is on Amazon Prime Video.