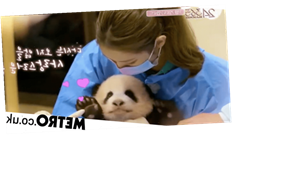 The final episode of BLACKPINK’s reality show has been postponed after backlash to a scene involving a panda cub.

The trailer for the last episode of 24/365 With BLACKPINK showed Jennie, Lisa, Rosé and Jisoo visiting the Everland Zoo in Yongin, where Fu Bao, the first panda to be born in South Korea, is kept.

However, the sweet video attracted major criticism as viewers claimed that the band had put the cub in danger by being in close contact with it.

In the trailer, Jennie and Rosé are seen touching an adult panda through metal bars while supervised by a zoo worker; neither girl was wearing gloves.

Later in the trailer, BLACKPINK are seen wearing gloves, face masks and protective clothing to meet Fu Bao, with Jennie getting to cuddle the cub.

The scenes caused outrage on Chinese social media, with people claiming that BLACKPINK had broken panda protecting guidelines and criticising them for touching an adult panda without wearing gloves.

The China Wildlife Conservation Association also sent a letter to Everland Zoo, demanding that they halt having non-professionals coming into contact with the baby panda and showing such scenes on TV shows.

Fu Bao was born three months ago to father Le Bao and mother Ai Bao, who arrived from China’s Sichuan province in 2016 as part of the country’s ‘panda diplomacy’, with pandas ususually leased to foreign countries on five-year terms as diplomatic gifts.

BLACKPINK’s agency insisted that the utmost care was taken while the girls were in contact with the pandas, but decided to delay the premiere of the episode.

A statement from YG Entertainment read: ‘It was decided that the last episode of BLACKPINK’s “24/365 with BLACKPINK” that was scheduled to be uploaded today on November 7 (Saturday) will be postponed.

‘BLACKPINK’s experience as panda keepers at Everland took place with professional veterinarians and keepers in attendance, and strict disease prevention and sanitation guidelines were followed.

‘When BLACKPINK met the baby panda, all members were wearing sanitary gloves, masks, and protective clothing, and their hands and shoes were disinfected each time the scene changed.

‘Nonetheless, to respect the recommendation of panda conservation experts who have stated that “non-professionals coming into contact with a baby panda can cause misunderstandings of a different dimension” and to follow the convention of international cooperation, we have decided to postpone the premiere of the video.

‘We thank all those who expressed their concern, and we ask for your unchanged love and interest in BLACKPINK and the panda.’

Last month, BLACKPINK released their debut album, The Album, which debuted at number two in the US and the UK.

The record features collaborations with Selena Gomez and Cardi B, and has produced the singles How You Like That, Ice Cream and Lovesick Girls.

MORE : Great British Bake Off 2020: Fans demand Lottie’s return as show ‘isn’t the same without her’

MORE : Tom Parker jokes that Max George is a ‘k**bhead’ for accidentally revealing his baby’s birth