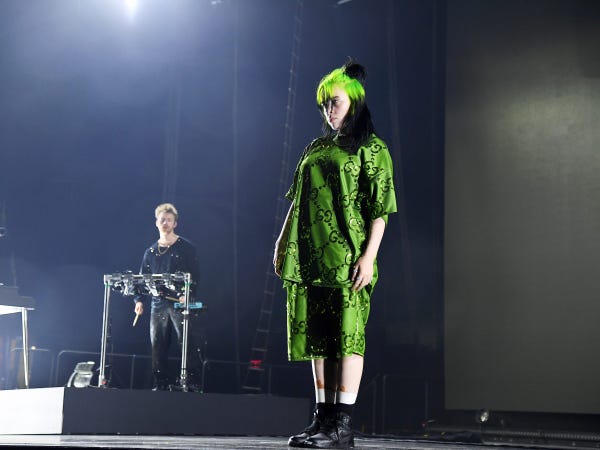 Billie Eilish has taken a subtle stance against body-shamers as new photos of her have circulated online.

"Not everybody has a wagon behind 'em, OK? Guts are normal. They're normal. Boobs sag — especially after breastfeeding. Instagram isn't real," Duru says in the video.

In case someone needed a reminder…. Instagram has warped a lot of y’all into thinking NORMAL bodies are abnormal. NO. Not every black girl has a shelf behind them. Stomach pudge is completely normal. Most boobs SAGGGG. And to all my mamas out there, it’s ok! You brought LIFE into this world sis 💕

Eilish posted the clip in her Instagram Story shortly after the Daily Mail published photos of the singer running errands in Los Angeles, wearing a tank top and sweat shorts, rather than her signature baggy style.

Some people re-posted the photos to Twitter and made negative comments about the teenager's body. One widely circulated tweet apparently came from a 29-year-old man, who said Eilish had "developed a mid-30's wine mom body."

Still, many others have come to Eilish's defense, calling her "beautiful," arguing that "all bodies deserve to be celebrated," and roundly criticizing unrealistic beauty standards.

Others took the opportunity to recirculate the short film Eilish made entitled "Not My Responsibility," which artfully comments on body-shaming, sexism, and the visual expectations people have placed on her.

Back in April, the Grammy-winner told Dazed that she began wearing loose-fitting clothing because she felt insecure.

"The only reason I did it was 'cos I hated my body," Eilish added.

She also told GQ in June that she doesn't want anyone judging the size or shape of her body.

"But that doesn't mean that I won't wake up one day and decide to wear a tank top, which I have done before," she said then.