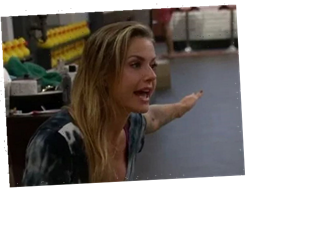 After Tyler’s botched plan to get himself evicted and save Bayleigh from the block, tensions were at a high in the Big Brother house.

Tyler’s decision came out of the left field, and it was likely fueled by him losing his lucrative stipend should he self-evict.

This was the final eviction before the jury house, so the next evicted houseguests will not be meeting their loved ones until finale night.

Bayleigh and Da’Vonne felt played by Tyler after his big speech about them being in the house having a bigger purpose.

Understandably, Bayleigh felt betrayed by Christmas, largely because she thought they were friends, and understood each other in the game.

Da’Vonne and Christmas have a talk that quickly gets heated, with Da’Vonne saying Christmas used personal information to advance her game.

Bayleigh came out of the Diary Room and heard the fight, but it quickly resulted in Christmas cursing and pointing fingers in her face.

Bayleigh did nothing wrong, and was caught in the crossfire of an argument between two sides of the house, so she and Da’Vonne went outside.

Da’Vonne went outside to cool off and said that she couldn’t blow up on Christmas because of how it would be perceived by the viewing public.

It was a harrowing reminder of the racial bias that has existed on Big Brother for several years now, and the good thing is that CBS edited the episode in a way that showed both sides of the argument.

The issue here is Tyler. Had he not offered to sacrifice his game, Christmas would not be in this position. Sure, she nominated BayDay for eviction, but that was a game move.

Christmas is feeling the heat because she’s still a major part of the majority alliance, meaning that the pickings for nomination were slim.

In the end, Bayleigh was evicted by a vote of 9-0, with the houseguests vowing to keep Da’Vonne in the game … for now.

The HOH competition got underway, and it was the typical midseason endurance style, and it quickly emerged it could be another week of the women in power.

The episode showed him reading a letter from his family, and tearing up about it.

He didn’t want to make a big deal of it, so he left the Diary Room and prepared for the day ahead.

But, he broke down and Tyler found him. There are some moments that should not be shown, and Cody reading the letter is one of them.

He deserved privacy for what was a life-changing moment.

Looking ahead, we have the nominations, the results of the competition, and so much more insanity.