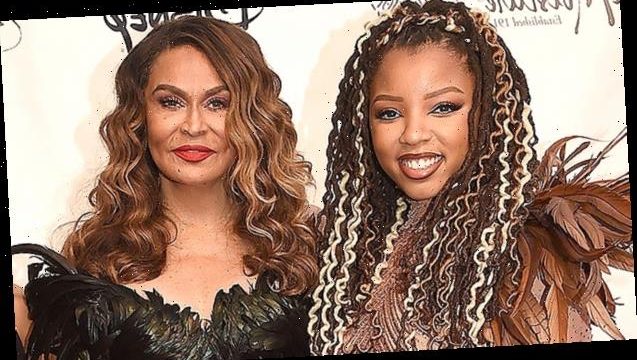 Tina Knowles shared an adorable throwback photo of Beyoncé and a young Chloe Bailey from the set of ‘Fighting Temptation’, where Chloe played a young Queen B!

While Mathew Knowles, 69, appeared to be offended by a recent comparison of his superstar daughter Beyonce to Chloe Bailey of the singing duo Chloe X Halle, Tina Knowles was here for it! Beyoncé’s mom, 67, shared a super sweet throwback photo of the Destiny’s Child singer and a young Chloe when they worked together on Fighting Temptations, as well as a movie clip, on Thursday, Mar. 18. Years later, the 22-year-old singer and her sister signed to Beyoncé’s Parkwood Entertainment Label — and even toured with Queen B and Jay-Z for 2018’s On The Run II tour.

“How cute and prophetic is this that Chloe played Beyoncé’s character as a child in the movie Fighting Temptations. Who would have ever thought that one day Chloe would be signed to Beyoncé’s label. (right pictured with Beyoncé),” Tina began her lengthy caption, ensuring her followers were well aware of Beyoncé’s strong support of Chloe — who is set to star as Ariel in the live action version of The Little Mermaid. “Beyoncé loves and celebrates the talent of Chloe and Halle 100 percent. They are so super multi talented and the sky is the limit for them. They have only touched the surface of the success to come in their careers!” Tina gushed.

Tina’s sweet message is a far cry from Mathew’s recent take on Chloe being compared to the “Single Ladies” singer. “You’ve got to be kidding me, right? You’re asking me that question?…Are you actually serious that you are comparing that young lady to Beyonce?” Mathew replied on Leah A. Henry’s podcast Leah’s Lemonade. Mathew’s. In the conversation, Leah noted that fans have often described Chloe as a “younger” Queen B. Leah asked again, “The same thing you saw in young Beyonce, do you see that in Chloe Bailey?” — clarifying she meant in the talent category.

“Okay, if you’re talking about a movie — not talent-wise,” Mathew said. “Talent-wise? Are you telling me talent-wise, somebody is an idiot enough to compare her to Beyonce, talent-wise? Are there people saying her talent is equal to Beyonce? They’re idiots. Period,” he said, shutting down the conversation. While the young women have been singing their whole lives, the R&B duo’s 2020 album Ungodly Hour was their most successful yet! Single “Do It” became their most popular single to date, as well as their first to chart on Billboard Hot 100.