At Sunday’s Contenders Film: Los Angeles event, The Tender Bar star Ben Affleck and the two young actors — Tye Sheridan and Daniel Ranieri — who share the role of the older and younger J.R. Moehringer in George Clooney’s film version of Moehringer’s memoir, joined me virtually as part of the Amazon Studios presentation.

Clooney’s follow-up to his Netflix sci-fi pic The Midnight Sky is an adaptation of Pulitzer Prize winner Moehringer’s bestselling personal coming-of-age story, with the screenplay by Oscar winner William Monahan (The Departed, The Gambler).

It tells the story of J.R. (Sheridan and Ranieri), a boy growing up in Long Island who seeks out father figures among the patrons at his uncle Charlie’s (Affleck) bar. As his mother (Lily Rabe) struggles to provide her son with opportunities denied to her — and to leave the rundown home of her father (Christopher Lloyd) — J.R. begins to pursue his romantic and professional dreams.

For Affleck, reuniting with Clooney nearly a decade after both shared Best Picture Oscars for 2012’s Argo, which Affleck also directed and starred in, this reunion in which he simply acts was a dream come true. 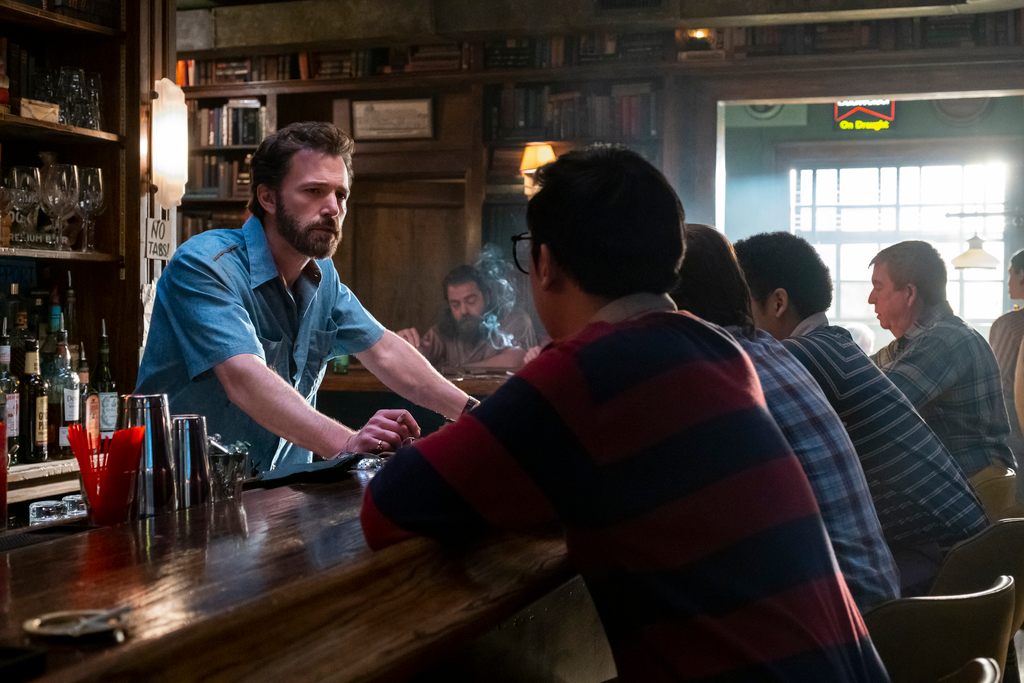 “It is really only one of two times in my whole career that I had a great director send me a great script with a great part and offer it to me. It is very unusual,” Affleck told me. “I always kind of thought I was generating my own material and putting things together, and this was one of those things I thought happen to luckier people. It was just manna from heaven.

“Before I even read it I just wanted to do it with George,” he added. “I really like him but I didn’t even know how good a director he really was, particularly with actors and how much he would help me. I read the part and I thought, ‘Is this a joke?’ because anybody would do this. I was just thrilled. It was a no brainer. It was one of those very very easy decisions you will never regret. You’re very hopeful about it and the experience was everything I could have hoped for and the other actors were fabulous. I know everyone always says that, you are kind of expected to say that in these situations, but this is the rare exception where it all actually is true.”

Sheridan talked about relating to J.R. as he took the role of the older teen with hopes to go to Yale and become a journalist.

‘The Tender Bar’ London Film Festival Review: Ben Affleck And George Clooney Team For A Warm And Memorable Story All About Family

“I think I connected to a lot of this character personally,” he said. “I think a lot of people see the film or read the memoir and know someone that they maybe grew up with who had only a single parent in the home. I think it is a story about a lot of people, but I think for me it was the idea of I guess trying to overcome a place that you come from and all the stereotypes that come with that. I think that really spoke to me, and then I was a fan of a lot of George’s films and then there was the chance to work with an actor-director like that, and Ben too. And it had a lot of heart. It is a movie that feels good, especially at this time.”

Ranieri had never made a movie before and was basically discovered from a YouTube video that went viral in which he railed against the pandemic.

“It was crazy. My mom shot a video of me cursing. She showed it to a couple of friends. It went viral. Then a couple of months later Jimmy Kimmel saw it on some comedian’s Instagram and then his assistant contacted my mom and said Jimmy wanted me on that show that night,” he said. “So I was on the show and then right after that George Clooney’s assistant Rachel Tenner contacted us and said George wanted me in his next movie. How is this happening??”

Well, it did happen, and Ranieri steals all his scenes and wants to be an actor now.

Amazon Studios opens The Tender Bar in theaters on December 17 in Los Angeles and New York, followed by a national rollout five days later. It will be available globally for streaming January 7 via Amazon Prime Video.

Check back Tuesday for the panel video.