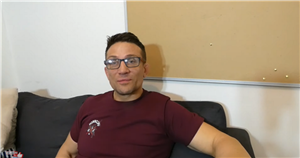 Alex Reid has opened up about his time in jail, saying he witnessed a stabbing and was taunted about his failed marriage to famous ex Katie Price.

Offering the first insight into his month-long spell in HMS Pentonville, the 45-year-old said: "A big thing in prison is postcode wars. A smaller version of what's going on in Israel, or any war in the world.

"These young lads are territorial, fighting over their postcode. They're killing each other. Literally. I witnessed one stabbing while I was in the shower."

Alex said the experience was one he would never forget. "Life is a little bit surreal at the moment," he explained. "I was only in for four weeks, but it's still made an impression on me, a very lasting impression.

"I actually enjoyed it, isn't that weird? But I don't wanna go back there.

"I think the reason why I said I enjoyed it and why I'm feeling a bit surreal and a bit weird right now is because I didn't really enjoy it."

Speaking on his YouTube channel, the cagefighter said he was able to offer advice to his fellow inmates.

"I found myself all throughout the prison thing, lending an ear to different people and making it all about them, nothing about me, and it was lovely," Alex continued.

"I actually enjoyed that, I miss that. I was mentoring people. I wasn't trying to do it but people were coming up to me for advice.

"I think the main thing about that is just having compassion, and it's not about having judgement, and that's one of the bad things about prison."

But the experience wasn't all good for Alex, who was taunted about his famous ex-wife.

"There were a couple of comments about my ex-wife [Katie] and one about dressing as a girl. Just one.

"Everyone could see I wasn't someone to be messed with. And that's a tricky thing to do in prison. You don't want to be too strong, too alpha male, create attention."

Alex was sentenced to eight weeks in prison back in April after trying to defraud a car insurance company out of £61,000.

The television personality, who has been diagnosed with Asperger's Syndrome, said his sentence was "unjust" but took to believing in God and spirituality to help him get through the experience. "I did this stupid thing more than four years ago and in the grand scheme of things, I'm not a rapist, I'm not a murderer, I'm not a thief," the former paratrooper said.

"I felt like it was unjust but let's get it real, the real courts that matter, the spiritual courts, I believe they are never unjust.

"So I wholeheartedly took this experience, and it wasn't pleasant, although I did say I enjoyed it. I'd rather not have been there. When life gives you lemons, you make lemonade.

"I took this experience and I used the best I could out of it to change," the Celebrity Big Brother star added.