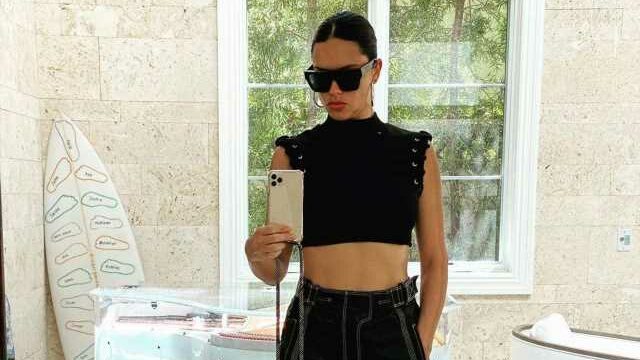 The ‘Ocean’s 8’ actress and boyfriend Andre Lemmers have welcomed a new addition to their growing family, a bundle of joy named after the color of the baby’s own eyes.

AceShowbiz –Adriana Lima has delivered a baby boy. On 29 August, the 41-year-old model – who has Valentina, 12, and nine-year-old Sienna with ex-husband Marko Jaric – and her boyfriend Andre Lemmers welcomed son Cyan into the world in Santa Monica, California.

The little boy “already has mommy’s lips and eyes,” a source told People magazine. “Mom and baby are at home and healthy,” they added.

The insider also explained how the couple chose the tot’s unusual name. The source said, “[The name is] inspired by the beautiful colors of the water across the globe in destinations like the Maldives, Bahamas, and Bora Bora. Cyan is the color between green and blue in the color spectrum.”

Adriana announced her pregnancy in February when she made her TikTok debut with a video that featured her getting her own back on Andre after he had made her jump out of her skin. In the clip, the 40-year-old model’s boyfriend makes her jump several times before she wakes him up to show him the pregnancy test displaying “pregnant.”

A sonogram was then shown with a heartbeat heard before revealing that the unborn tot is due in “fall 2022” in the caption.

Adriana previously admitted motherhood changed “everything” in her life. The “Ocean’s 8” star confessed that her beauty and self-care regimes went “out the window” at times as she focused her attention on her children.

She said, “Becoming a mother changes everything. Beauty and self-care go out the window sometimes. But as my two daughters have gotten older, I’ve realised that they copy a lot of what I do and my habits, and it’s important for me to make sure they’re copying good ones.”