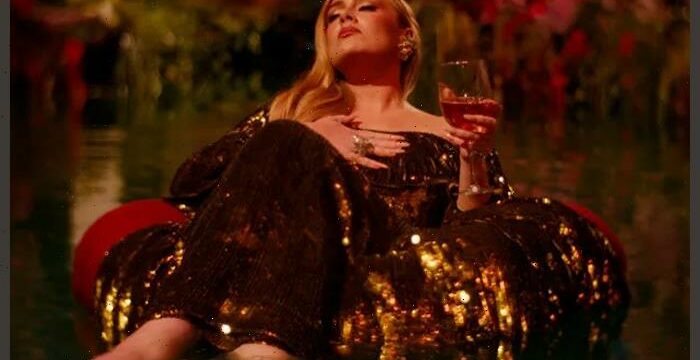 Adele recently released a video for “I Drink Wine,” a single from her 30 album. The singer premiered the video during a special “Happy Hour with Adele” she hosted in West Hollywood on Tuesday night.

The visual, directed by Joe Tabot, shows Adele, clad in a sparkling gold gown and holding a glass of wine in hand, floating along a river on an inner tube.

“Why am I obsessing/ About the things I can’t control?/ Why am I seeking approval/ From people I don’t even know/ In these crazy times I hope to find/ Something I can cling on to/ ‘Cause I need some substance in my life/ Something real, something that feels true,” she sings.

Some synchronized swimmers, a handsome fisherman and a shadowy troupe of chic back-up singers are also seen joining her.

The song peaked at No. 18 on the Billboard Hot 100 back in December following the release of 30.

Adele previously released the videos for the No. 1 hit “Easy On Me” and a top 5 track “Oh My God” from the album.

Adele wrote on social media that the clip for “I Drink Wine” was actually the first she had shot in the album cycle.