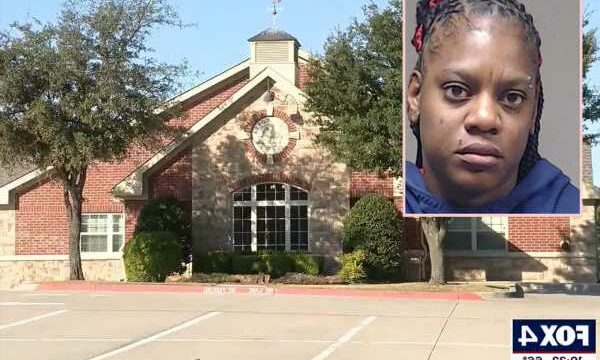 A preschool employee in Texas was arrested this week after four toddlers were hospitalized for exposure to THC. WTF??

According to WFAA, Anisah Burks faces four counts of injury to a child and one count of possession of a controlled substance after allegedly sending some of the students at Primrose School of Prosper to the hospital on Halloween. Franchise owner Mike Casey said in a statement to NBC News that the children began to show “unusual symptoms of illness” on Monday. When staff members noticed the kids were sick, they immediately called the authorities, the school explained to Fox 4 News.

The pre-K center evacuated students and employees once first responders arrived at the scene. During that time, police said, the 35-year-old suspect left the premises. Per the school, all four kids were around a year old and were rushed to the Children’s Medical Plano to receive treatment. Thankfully, they have since been released from the local hospital.

Prosper authorities told WFAA that “evidence suggests these four students were exposed to THC, the active ingredient found in marijuana.” According to Fox 4 News, police claimed when Anisah took off from the school, she happened to leave behind a black hoodie and a Ziploc bag with THC gummies in it. It’s unknown how the children got a hold of the edibles at this time.

Meanwhile, court documents obtained by the outlet noted that Anisah spoke with police on Monday evening. An arrest affidavit also says she admitted to bringing the THC gummies to the classroom. She was subsequently booked into the Collin County Jail on Tuesday morning. Following the incident, Primrose insisted to Fox 4 News that “as part of our stringent safety measures, we conduct background checks on all teachers and staff members prior to their hire,” adding:

“The individual involved was subjected to those same background checks as all our teachers.”

In another statement to WFAA, the preschool shared that Anisah has been fired:

“Words cannot sufficiently express our deep concern over this matter. We have every reason to believe, including from the authorities, that this was an isolated incident involving one teacher who was immediately terminated. We are praying for a quick recovery for these children and are relieved that they are all home from the hospital.”

“We appreciate the continued cooperation of Primrose School of Prosper as well as the public during the ongoing investigation.”

We cannot stress this enough — keep medications and edibles in a safe spot, especially if you are working with kids! THC gummies and preschools do NOT mix!