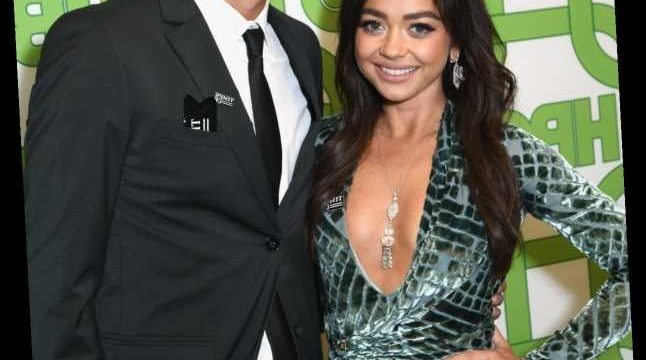 Celebrities: they’re just like us! They walk their dogs, they visit the grocery store, and some of them even love Bachelor Nation just as much as I do. However, unlike me, some A-listers don’t just watch The Bachelor and The Bachelorette — they romance the shows’ stars, too. There are more celebrities who dated members of Bachelor Nation than you may realize, and all the stories are hilariously random. And while most of those celeb-and-reality-star romances have just been flings, other couples have gone on to get engaged, tie the knot, and even have babies together (with no rose ceremonies required).

Though several A-listers have been linked to Bachelor alums over the years, not all of those rumored hookups are legit. As far as I know, Nick Viall never actually dated January Jones or Rachel Bilson, so sorry to disappoint. Ben Flajnik and Kris Jenner have also denied their reported fling, and it’s still unclear whether Madison Prewett dated NBA star Michael Porter Jr. However — whether they dated pre- or post-Bachelor fame — plenty of celebs have actually dated your fave reality TV stars. These 12 celebrities turned reality stars into real-life partners, and I’m still not over the random pairings. Sarah Hyland started crushing on Wells Adams while he was a contestant on Season 12 of The Bachelorette. During the "Men Tell All" special in July 2016, Hyland tweeted her approval, writing, "Ugh! @WellsAdams making a Lord of the Flies reference on men tell all??? #knewhewasthebestfromthestart." A year later, when she found out Adams would be serving as bartender on Season 4 of Bachelor in Paradise, she took to Twitter to express her excitement. "OH MY GOD @WellsAdams IS THE FRIKKIN BARTENDER?!" she wrote. "Best. Season. Ever. #BachelorInParadise."

That apparently got Adams’ attention and he slid into her DMs. By October 2017, the two went public with their relationship, and by July 2019, they were engaged. 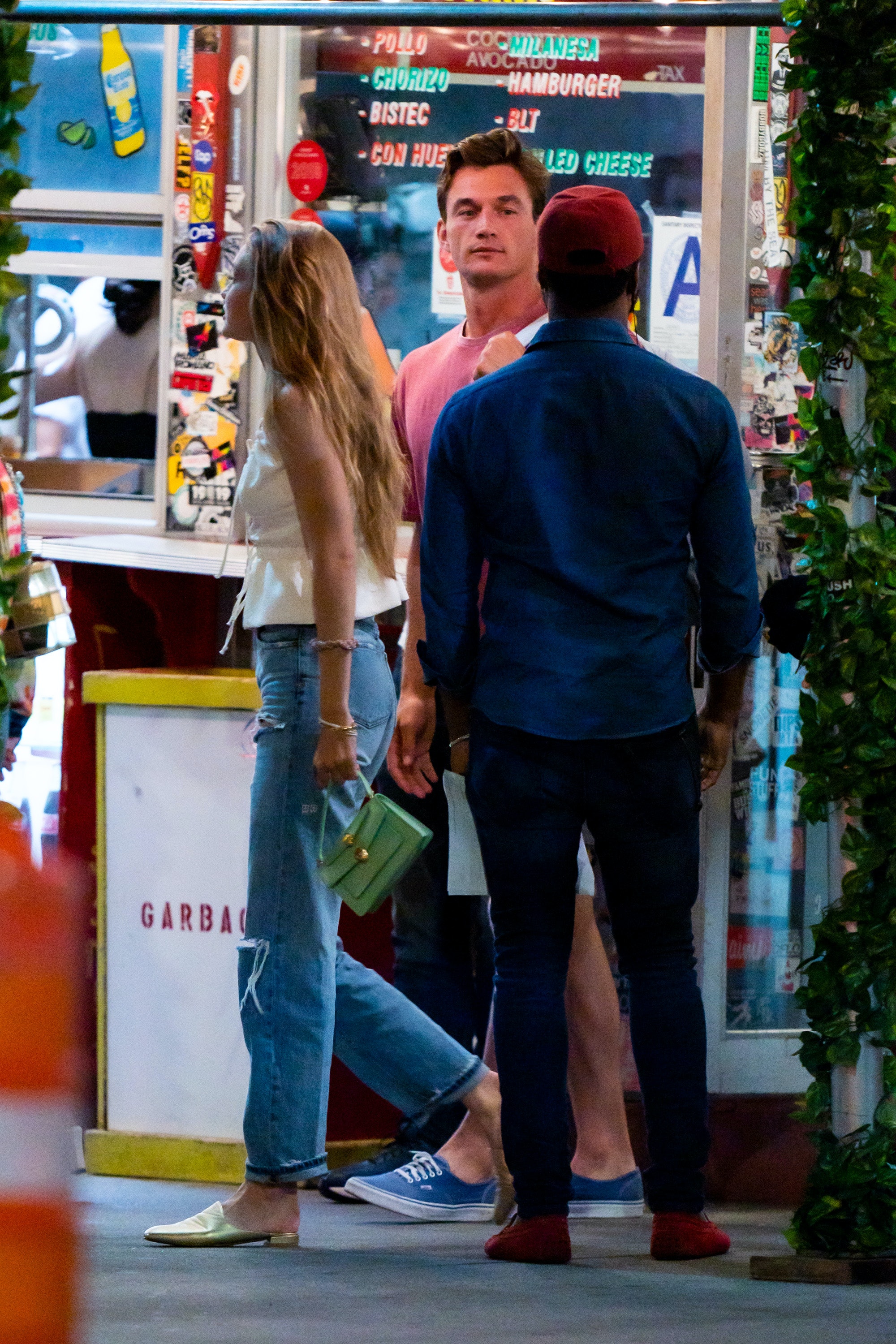 Soon after expressing a desire to reconcile with his ex Hannah Brown, Season 15 Bachelorette contestant Tyler Cameron shocked fans when he was reportedly spotted with Gigi Hadid in August 2019. At the time, an insider told E! News that the two had been friends for a while. "Tyler and Gigi actually have a few mutual friends in the modeling industry but met on Instagram," the source explained. "She knew of him before he got any wind of fame from The Bachelorette. Gigi is definitely interested in Tyler."

Cameron and Hadid went on to date for about three months before Cameron confirmed their breakup in October 2019 during an interview with People TV’s Reality Check. "I took it as I met a great person, a great friend. It wasn’t like a bad breakup or anything like that," he said. "It was just, we’re at different parts of our lives right now." After his split from Hadid, Cameron reportedly moved on with Kylie Jenner’s BFF Stassie Karanikolaou. In November 2019, the pair was reportedly spotted getting flirty at a Clippers game in late November 2019, which was reportedly followed by PDA at a nightclub. "They stuck by each other’s sides the entire night," a source reportedly told E! News at the time. "Tyler was holding Stassie at one point and they were dancing. They were chatting the entire night, whispering in each other’s ears and Tyler grabbed Stassie’s face at one point for a kiss."

The two kept the rumor mill turning with other reported hangouts, and they even reportedly spent New Year’s Eve together with friends. However, those dating rumors eventually fizzled out. Neither Cameron nor Karanikolaou ever commented on the relationship rumors. Demi Lovato is a proud member of Bachelor Nation, and during Hannah Brown’s season of The Bachelorette, she made it clear she was #TeamMikeJohnson all the way. In an Instagram Story showing the scene where Johnson called out Luke Parker for claiming to love Brown after the first group date, Lovato could be heard in the background saying, "He should win," in reference to Johnson. And after he was sent home, the singer even tweeted, "I’M RIGHT HERE MIKE I’M RIGHT HERE BOO MY MOM ALREADY LOVES YOU TOO."

When asked by People in August 2019 what he thought of Lovato’s not-so-subtle crush, Johnson said, "She would definitely be cool to reach out to, but neither one of us have reached out to each other." The two ended up going on a date (or perhaps a few dates), but the budding relationship seemingly fizzled out by October 2019. 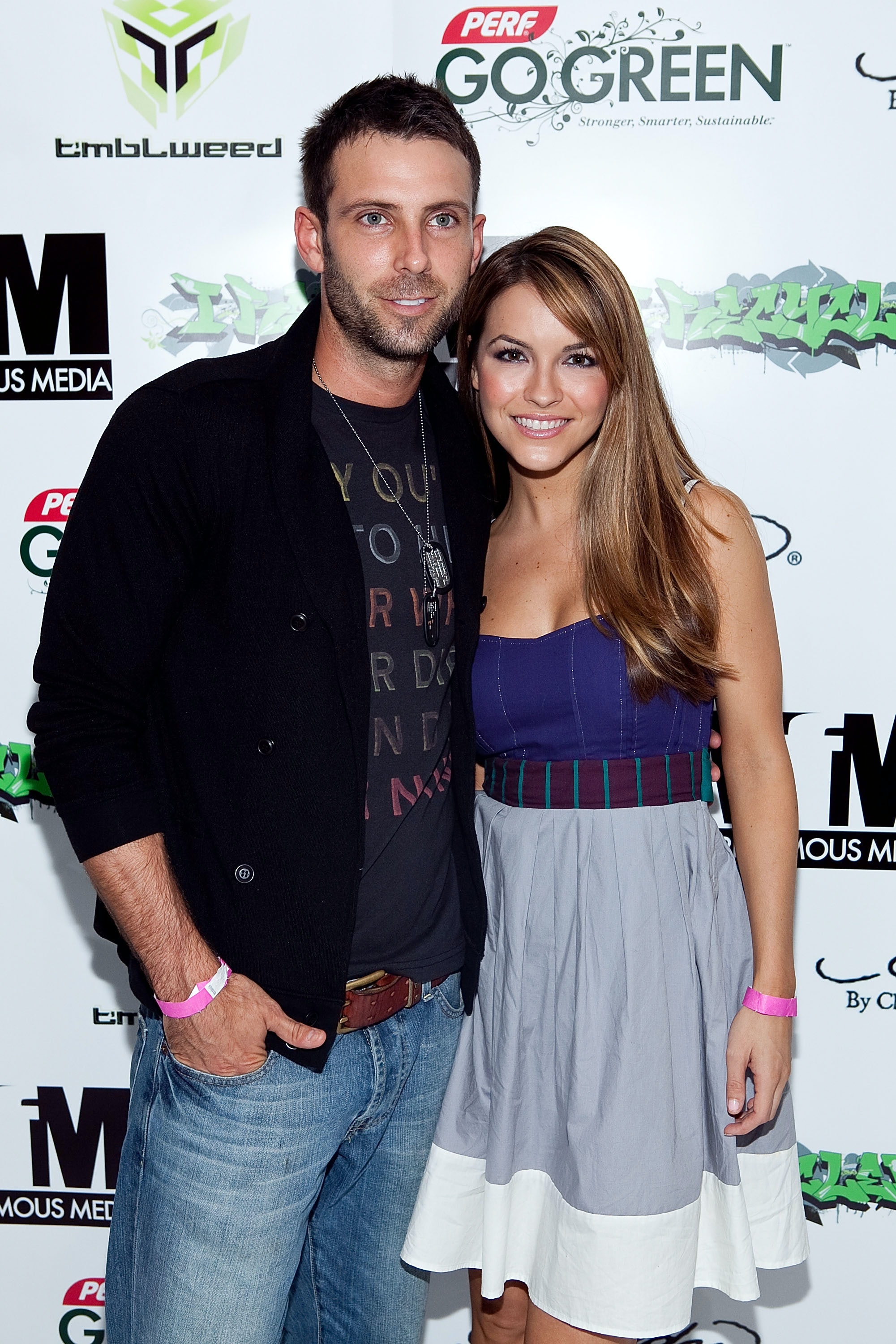 In late 2007, future Selling Sunset star Chrishell Stause began dating future Bachelorette contestant Graham Bunn after they were introduced by a mutual friend from All My Children. Stause and Bunn took a break when Bunn competed on Season 4 of The Bachelorette, but they reconnected right after, and in July 2008, the two went public with their relationship.

"We had dated off and on before that, but the timing wasn’t right," Bunn told People at the time. He explained that they "stopped seeing each other in December [2007]" but after his time on The Bachelorette, they were "out with friends" and "sparks flew." It’s unclear how long the two continued to date, but the relationship ended after Stause was approached by ABC to potentially become the next Bachelorette. According to Bunn, she broke things off with him after that.

As he explained during a January 2021 episode of the Click Bait with Bachelor Nation podcast, "I gotta give Chrishell all the credit in the world. She came to me — and I don’t know if it broke any kind of legal agreement — but she said, ‘Look, this is what’s going on in my life. I feel like this is what’s best for me and I want to pursue this avenue if it comes for me.’ And I wished her well!" She didn’t end up becoming the Bachelorette, but luckily, it doesn’t seem like there’s any bad blood between her and Bunn. 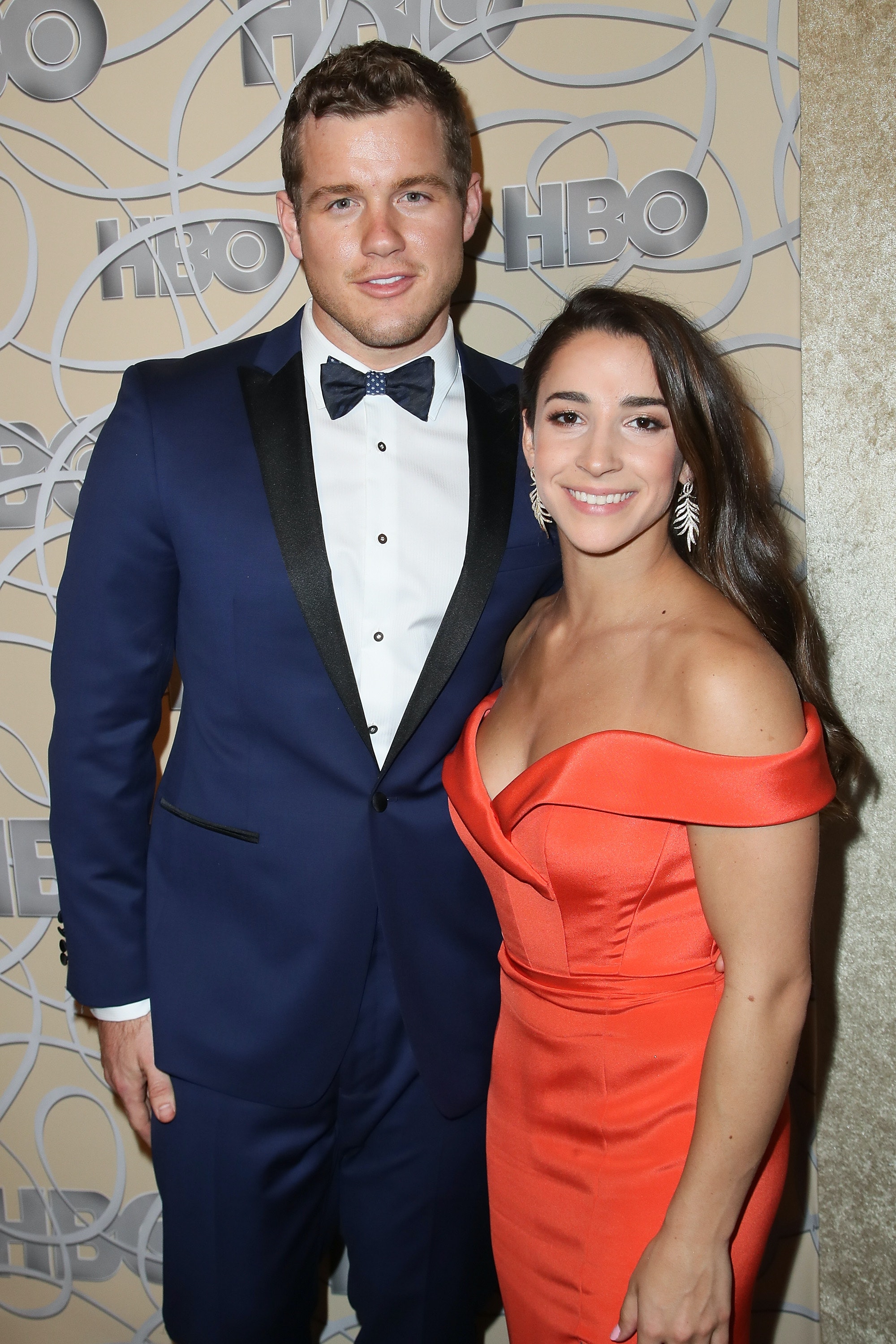 In August 2016, before he appeared on Season 14 of The Bachelorette, Colton Underwood decided to shoot his shot with Aly Raisman in a video for Yahoo! Sports, where he congratulated the Olympic gymnast on her performance in the 2016 Olympics and asked her out. Raisman responded with a tweet, telling Underwood she was "looking forward to meeting [him]," and in December of that year, the two went public with their relationship. "We happened to both be in Denver at the same time," Raisman told People. "I was there for less than 12 hours, he was flying in for just a few days. it just ended up working perfectly."

The couple ended up dating for about six months before announcing their breakup in June 2017. "We’re taking a break right now. We’re still good friends and talk, but all that travel had been a nightmare," Underwood explained to the Journal Star. He added, "It ended fine. We’re in a good place." Lucy Hale was briefly linked to Underwood in July 2020, shortly after Underwood’s split from Cassie Randolph. Rumors about a potential romantic relationship between the two started swirling after they were reportedly spotted hiking the Paseo Miramar Trail in Los Angeles. A source for TMZ reportedly claimed the maybe-couple had gone on a few "casual hike dates," and an insider reportedly told People they connected over Instagram DMs. "They are very casually dating," the source for People reportedly added.

However, little else was heard about the potential romance following their rumored hiking date. Neither Hale nor Underwood ever commented on the relationship rumors. 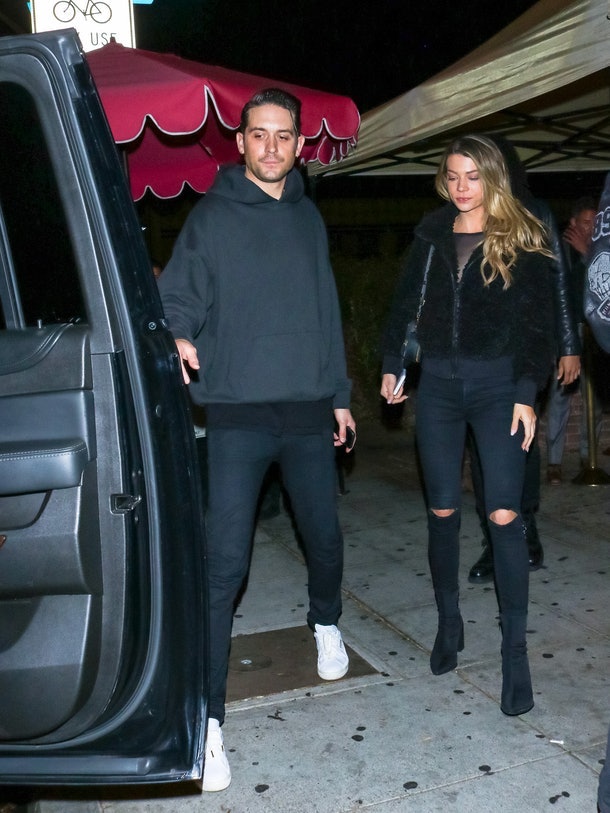 In January 2021, fans unearthed an old photo of Season 25 Bachelor contestant Sarah Trott seemingly leaving a club with G-Eazy back in March 2020. Per Us Weekly, the photos were reportedly taken outside of West Hollywood nightclub Delilah. However, it’s still unclear whether the two ever actually dated, and neither Trott nor G-Eazy ever commented on the rumors. 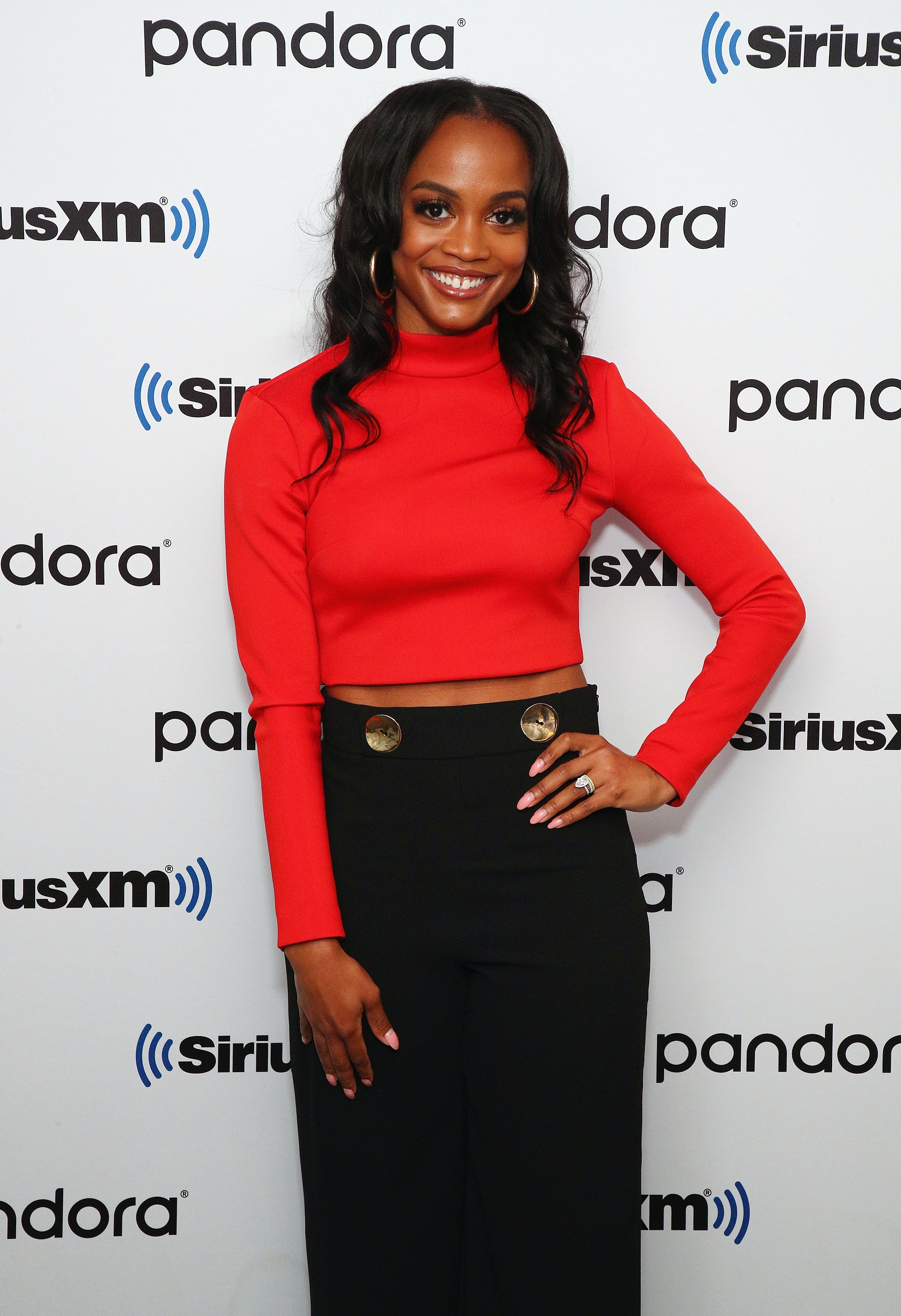 In June 2017, Us Weekly reported that Season 13 Bachelorette Rachel Lindsay dated NBA star Kevin Durant when they were both students at the University of Texas at Austin, and reportedly, they broke up when she went to law school at Marquette University. Lindsay later clarified those dating rumors during a January 2018 interview with Sports Illustrated. "The way the media played it out, I think they said we were still serious and we were almost engaged. No," she said, adding, "I wasn’t getting engaged but we’ve known each other. We’ve hung out together." 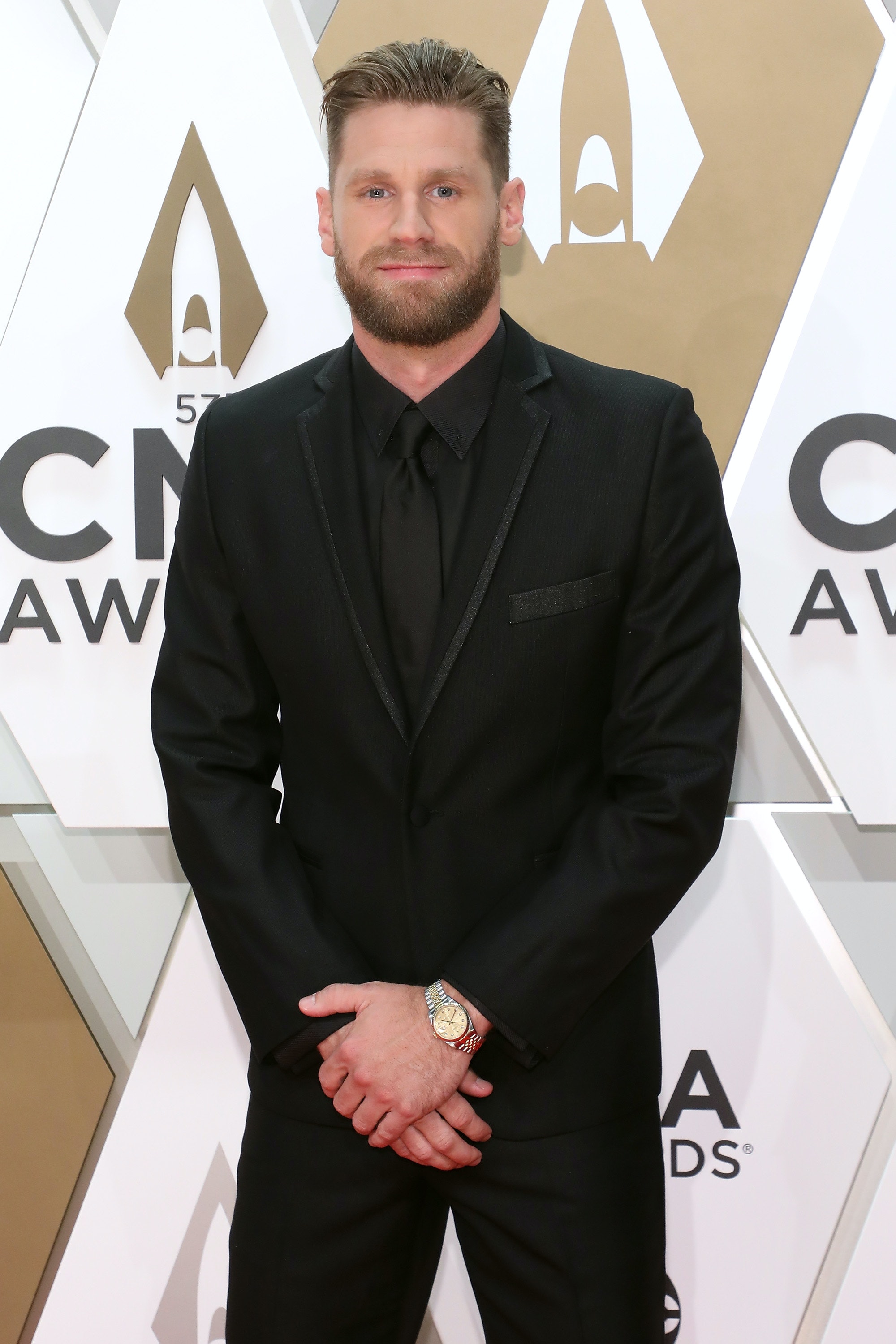 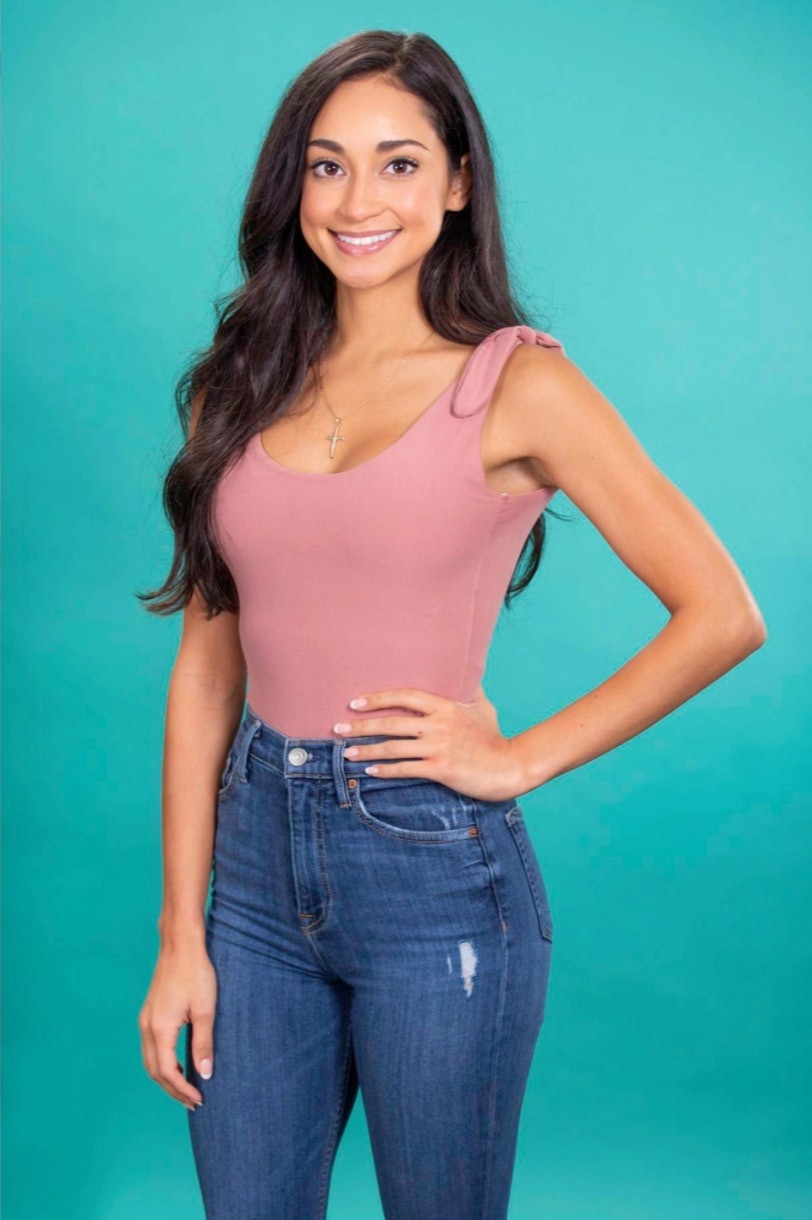 During a January 2020 episode of The Bachelor Season 24, country singer Chase Rice made a cameo appearance, during which it was revealed that Rice used to date Victoria Fuller, one of the women vying for Peter Weber’s heart. Apparently, neither Fuller nor Rice knew ABC had set up the awkward situation ahead of time. "I didn’t expect it. But at the end of the day, it happened," Rice explained during an interview with Fitz and the Morning soon after, adding, "I don’t know if it’s the producers, or if they just got lucky."

According to Rice, he and Fuller only "spent a night together in Charlotte," but during the episode, Fuller told Weber she and Rice "used to date." She added, "We dated but I broke it off with him because his lifestyle doesn’t really match up to what I want. I knew that I wanted to give this a try with you." 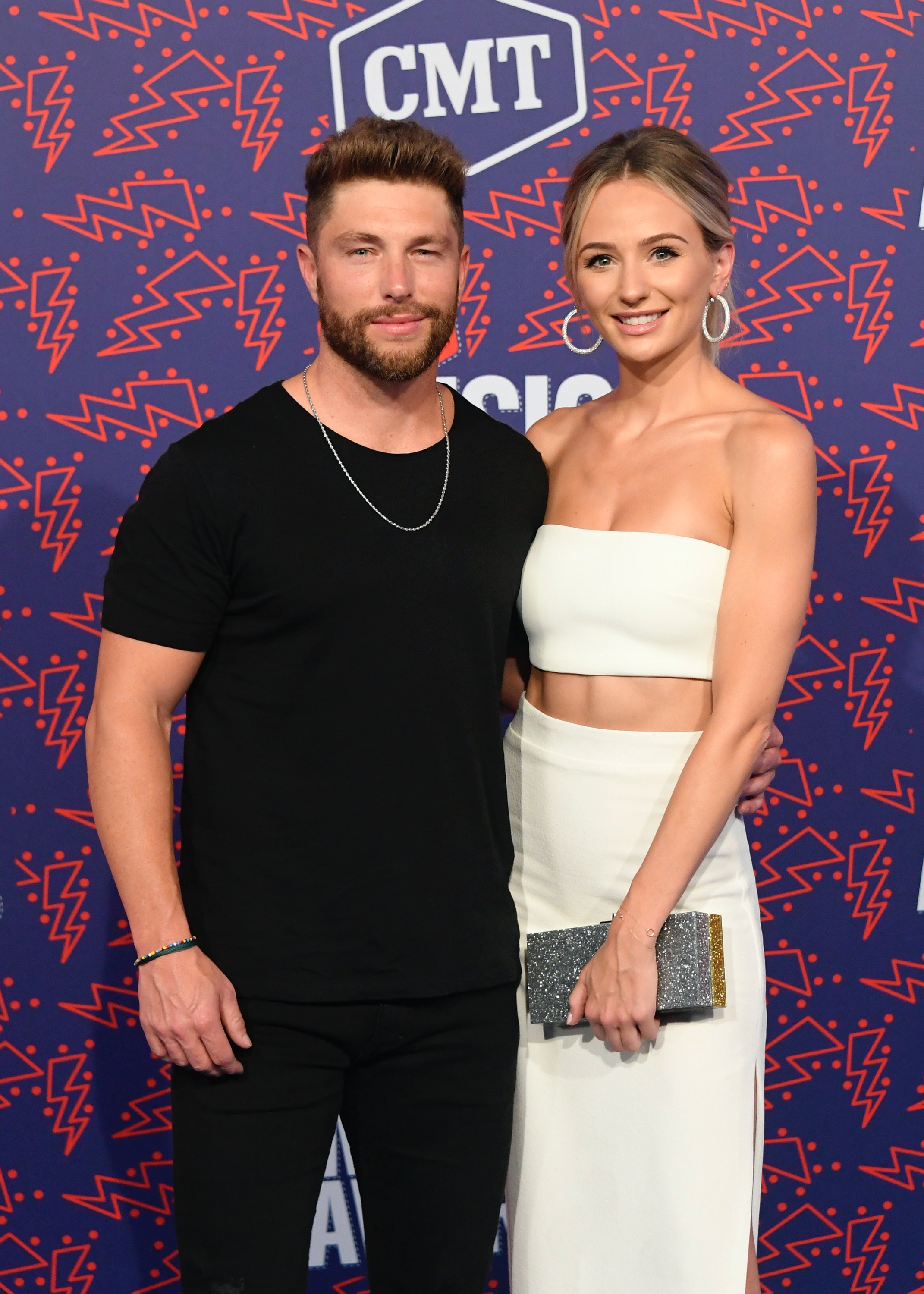 Though Lauren Bushnell was previously engaged to Season 20 Bachelor lead Ben Higgins, the two ended up calling off their engagement after 14 months in May 2017. A year and a half later, she sparked dating rumors with country singer Chris Lane after they attended the BMI Country Music Awards in November 2018. A month after that, during an interview with Hollywood Life, Bushnell explained that she met Lane while she was still with Higgins. "We met at an iHeart Radio award show in Austin years ago, gosh, it might’ve been three years ago, and that’s when we met initially and kind of just became friends," she said.

Lane popped the question in June 2019, and by October 2019, they were husband and wife. The couple is currently expecting their first child together. 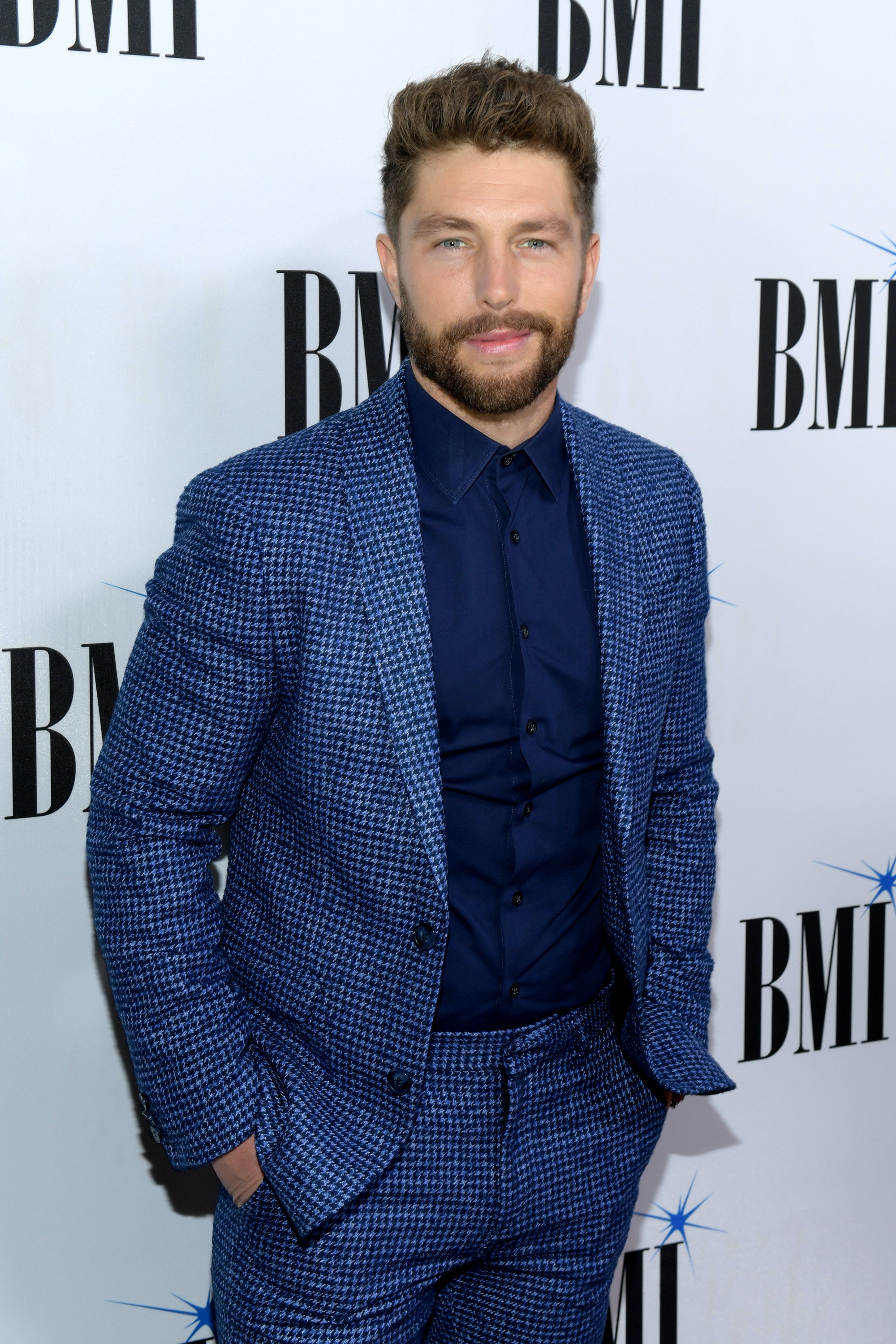 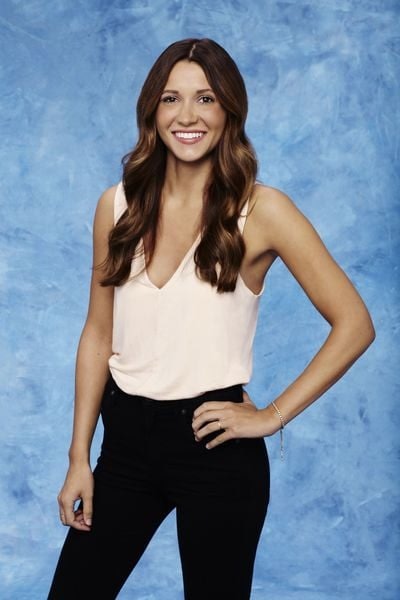 Apparently, Bushnell isn’t the first Bachelor alum Lane ever romanced. Before getting together with Higgins’ ex, Lane reportedly dated Bushnell’s fellow Season 20 contestant Lauren "LB" Barr. "Chris was dating LB right before Lauren," a source reportedly told Us Weekly in November 2018. "Lauren called LB a couple of days ago to tell her that they were together." Neither Barr nor Lane ever confirmed those dating rumors.

Not all of these romances lasted, but they’ll certainly go down in pop culture history.