Billionaire Elon Musk, soon-to-be owner of Twitter, has, in recent days earned many descriptions. Free speech warrior. Donald Trump revivalist. Destroyer of platforms. But one descriptor nobody has mentioned: baldness. That’s because Musk, now 50, likely had a hair transplant done some years ago. 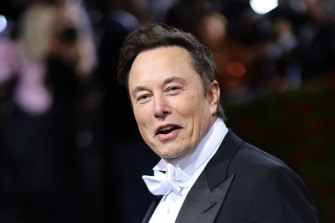 And, as befits the world’s richest person, the results, according to Dr Ateka Khan, hair transplant surgeon at Hair Doctors in Sydney’s Bronte, look fantastic. “The front hairline has natural density and hair direction and appears to have been planned and executed very well.”

The hair allegedly cost Musk somewhere around US $20,000 ($A29,000) a figure that doesn’t surprise Khan, who believes Musk likely had two procedures, known as FUTs, or follicular unit transplantations, which involve cutting out a long strip of scalp skin on the back and sides of the head from which individual hair follicles are dissected and then transplanted onto the hairless areas in the front. The only drawback is the scar left behind.

While experts believe Musk had a couple of FUTs sometime in the early 2000s, advances in technology now mean that scars – and the need for longer hair to cover them – are a thing of the past. “Current hair trends such as skin fades and buzz cuts are the reason why the latest FUE (follicular unit extraction) method is becoming the most popular, especially in younger men,” says Khan.

This involves extracting each hair follicle individually – that’s right, one by one – so that no stitches are required. “At Hair Doctors, we perform micro FUE with punch sizes as small as 0.75mm leaving barely visible scarring at the back.” The cost can be anywhere from $10,000 to $15,000.

“Men are starting to take pride in how they look now… most cosmetic treatments are on the rise in men and hair transplants have certainly started to gain traction,” says Khan, who adds that the majority of her clients are in their early 30s, a change she views as advantageous. “This is preferable to seeing patients at very advanced hair loss stages where even hair transplants may no longer be a viable treatment option.”

According to the International Society of Hair Restoration Surgery, based in the US, the market size of hair transplantation increased by 64 per cent between 2014 and 2021 and now accounts for US$6.5 billion. They say a total of 735,312 surgical hair restoration procedures were performed worldwide in 2019, which represents a 16 per cent increase from 2016.

The International Society of Hair Restoration Surgery puts the increase down to minimal invasive techniques, usually taking no more than a day. And, of course, the interest men, (who make up around 85 per cent of clients) now have in self-care practices.

Blame the surge in dating websites, blame social media and the beauty industry, which has done a hard pivot into men’s cosmetics. Business data platform Statista estimates that by 2024, the global male grooming market will be worth about US$81.2 billion. That’s a lot of beard oil. 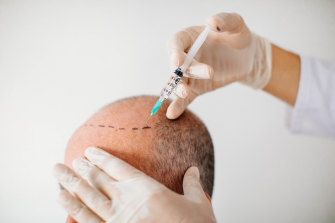 The number of men choosing to undergo hair transplantation procedures is growing. Credit:iStock

And although Musk took the hair transplant route, outside of Hollywood, he appears to be in the minority. Fellow space enthusiast Jeff Bezos, the former CEO of Amazon, has a shiny, hairless pate. Prince William, our future king, has taken to shaving his remaining locks, while his brother, Prince Harry, has recently said he is resigned to baldness. The royals, it must be said, are not really allowed to seem vain, lest they be crucified by the press. Duty before beauty and all that.

But if Botox can be normalised among women, why not hair transplants among men?

Perhaps the answer to that question lies not in the uptake of cosmetic procedures – which are increasingly more common – but the admission that people have had them.