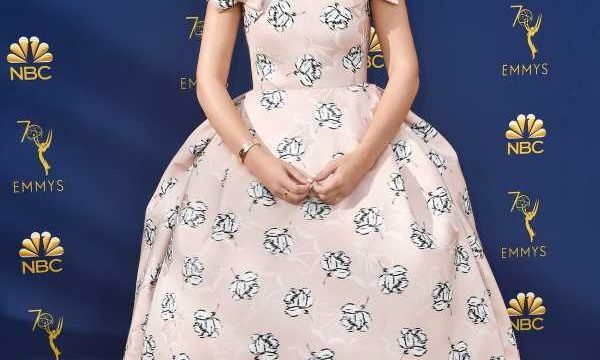 Is that Ariana Grande and her famous ponytail? Nope. It’s actually actor Millie Bobby Brown with a long blonde ponytail, which she slayed at the Godzilla film premiere in Beijing. Brown’s extra lengthy and dramatic pony looked totally inspired by Grande’s signature updo — but with a twist.

The adorable Brown has established herself as quite a style star who makes savvy fashion and beauty choices while she grows up before our very eyes. The Stranger Things actor always kills it on red carpets, whether she is carrying a clutch with her name on it to the Emmys or a two-piece jumpsuit to the VMAs. Her look at this particular premiere was unexpected but totally gorgeous.

The 15-year-old star dressed in a flowing, peachy pink Valentino gown with a ruffled, off-the-shoulder top and floral appliques sprinkled throughout the tulle skirt. She wore matching and monochromatic pink makeup on her lids, lips, and cheeks. The overall presentation was a little bit angelic, a whole lotta stunning, and incredibly fashion forward. But it was her mega long, Grande-inspired mane that brought all of the drama, thanks to the ombre hue. It also rendered her nearly unrecognizable.

Brown’s coif was created by celebrity stylist Adir Abergel, who shared an image of his client’s ethereal and romantic look on his Instagram feed.

Brown’s hair was swept off her face and fastened into a major, high ponytail. It’s basically the longest you’ve ever seen her strands, since she usually wears her light brown locks in various shoulder-skimming styles.

In this image that the stylist also posted on Instagram, you can truly appreciate the contrast of Brown’s dark roots and the light ends of her locks. Fans were loving this look, and let both Abergel and Brown know in the comments of their respective Instagram posts.

Abergel shared another shot of Brown wearing her newly- flowing locks down and framing her face while doing press for the film. Since Brown was showing off a shoulder-grazing lob as recently as last week on her personal Instagram, her strands are likely the work of extensions.

Brown’s entire premiere look was glorious and her ponytail was an excellent finishing touch. It’ll have you looking forward to what she rocks at her next major red carpet event.