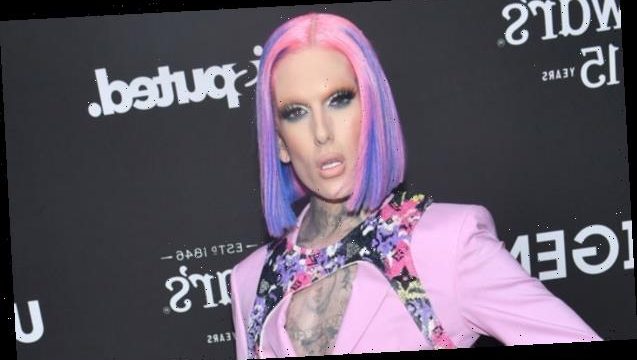 Jeffree Star parted ways with his shoulder-length blonde hair and debuted a pink buzzcut. Watch the beauty YouTuber shave his head in a dramatic new video.

Jeffree Star‘s old ‘do is “dead” after this extreme hair makeover. The 35-year-old beauty YouTuber debuted a neon pink buzzcut in an Instagram video that he shared on March 13, which he captioned, “That hair was dead… BUT B–CH I’M ALIVE.” This is a major change for Jeffree, who loves to rock long hair (whether that be his natural hair or a colorful wig).

Kamilla Nichole filmed the hair reveal video, which started with Jeffree standing in a Versace robe inside his Hidden Hills palace. His shoulder-length, platinum blonde hair was still intact, until the makeup guru took a hair clipper and began to shave. The video then cut to Jeffree ripping off his designer robe, and after a smooth transition, Jeffree popped out with this brand-new pink buzzcut and a neon yellow pantsuit.

Fellow famous MUAs jumped into Jeffree’s comments section to rave over his hair makeover. “Wow!!!,” Jaclyn Hill commented, while Erika La’ Pearl wrote, “Omg [blushing emoji] I love it.” Jeffree’s many other fans were in agreement.

Jeffree Star with his blonde bob in Jan. 2021. [Instagram/@jeffreestar]

Jeffree’s new hair matches his bubblegum pink Lamborghini, which he later drove to the Supercar Show OC in Newport Beach, CA after shaving his hair on Sunday. The pink hair seemed to be a hit with fans, who could be heard freaking out over Jeffree in videos on his Instagram Story.

On the very same day of his hair makeover, Jeffree uploaded a YouTube video revealing another big change in his life: he was parting ways with his longtime videographer of five and a half years, Christian. “I’m so emotional right now…on top of that, which is a very major shift in my life…I can’t just put an ad out on LinkedIn and say, “Hey, who wants to film my life?’…So it’s so scary,” he explained.

Jeffree also made headlines earlier this year due to a viral rumor that claimed the YouTuber was having an affair with Kanye West. It didn’t take Jeffree long to clarify that he has “never hung out” with the rapper, and that the rumor was a “lie.”